Most ships in Anno 2205 are only in the military - an exception to the Command Ship and Container Ship.

John Rafferty watches over the player's fleet, encouraging the player to carrying out upgrades. Ships may be upgraded up to three different ranks, improving their abilities: Veteran, Elite, and Master. These abilities are gained through combat experience. Ships sunk during combat missions are replaced after the mission is over. They will either keep their current upgrade level or start out fresh depending on the difficulty setting. 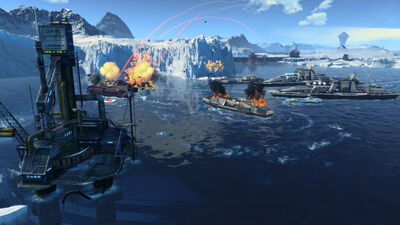 In Anno 2205, there a shift made by the game developers. There is no shipyard, and the only way to acquire ships is by advancing in corporate rank. The normal cargo ships that the player would normally be built by the players are no longer necessary. Intra-sector transportation is no longer necessary as resources are no longer based on a single island and trading with NPCs occurs instantly.

With the Frontiers DLC, warships can now be utilized in temperate and arctic regions to fend off Orbital Watch assaults and resolve hostile events in such regions.