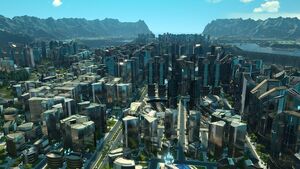 The Temperate is one of the three main regions in Anno 2205. It is the only region allowing the establishing of farms, thus becoming the cornerstone of Earth's food and beverage production. As a result, the Temperate is able to host a large amount of Residential complexes, being the only one with more than two Population levels.

The large quantity of mountains available in the Temperate sectors allows the gathering of a variety of strategic resources that are required across all regions, such as

Diamonds. However, the nonexistence of combustible materials such as oil and Uranium increases the region's

Energy dependency. This problem is solved by providing energy from the Moon, an expensive technique available in the later stages of the game.

Bulding large metropolises in this region is suggested by the campaign and required to provide the necessary funding to the player's corporation. The elevated revenue acquired from the Temperate population is the main source of income for the player given the lack of NPC trading and the limitations of the World Market. However, to achieve this, the supporting factories and settlements must be built on the Arctic and Lunar regions, as some resources needed to level up the population are only available in these locations.

The Temperate region is comprised of the largest sectors in the base game. Most of the temperate islands are suitable for mass production of goods, as well as able to sustain cities of up to a million citizens. The weather is reminiscent of Earth's tropical region near the Equator line, providing a steady supply of sunlight that enriches the soil and allows the establishing of farms.

Although more than half of the Temperate region is comprised by seas, fishing is not possible due to the extinction of nearly all marine species during the aftermath of the Ebashi Trench prototype disaster. As a result, only

Water can be gathered through the Desalinization Plant. The only other marine resource available in the region is

Algae, used in the production of

Rejuvenators, unlike in Anno 2070 where it was used to produce Functional Food. However,

Fish is available in the artificial Arctic region, as it was not affected by global warming as much as the Temperate region was.

The Temperate is the only region that bears similarities with maps from previous games, specially Anno 2070. However, fertilities and ecobalance have been removed or reworked. This move is most likely related to the introduction of unique, smaller and more detailed maps instead of the randomly generated ones used in previous installments. Also, the separation of the resources into different regions could be considered the successor to the fertilities system, as it restricts what resources the player can produce in certain sectors, as well as forcing them to develop every region in a similar way they used to develop islands with specific resources in previous games.

As a result of its high production capabilities and land fertility, the Temperate is the only region with more than two Population levels. Fully satisfying the needs of all four levels requires the production of twelve different consumer goods, four of which can only be completed in the Arctic and Lunar regions. In addition, four different public buildings must be built to satisfy their

The Workers are the first population level available in the Temperate region and in the overall campaign. They are the only population class that does not need consumer goods from other regions to reach the next level: their needs are

Information (satisfied through the Infodrome), all of which can be produced in the Temperate region.

Satisfying subsequent population classes requires goods produced only in other regions. For example, the second Population level, the Operators, require

Rejuvenators, both of which can be produced in the Temperate. However, they also require

Neuro Implants, exclusive to the Arctic region, to reach the next level. The amount of these so-called external resources increases for the two advanced population levels. Workers and Operators comprise the low-density side of the Temperate cities. Their residences occupy significant space while providing

Workforce and revenue insufficient to sustain the other regions, specially the Moon.

Therefore, and to be able to finance the Corporation's high costs, the Temperate provides the player with two advanced Population levels: the Executives and the Investors. Both classes occupy high-density buildings that, in contrast to their low-density counterparts, allow for the conglomeration of thousands of employees in a single island. Although their needs require sophisticated production chains that often involve goods from all three regions, the amount of tax revenue gained in return is as much as ten times that of the Workers and Operators combined.

The Temperate is the only region able to produce more than one type of food, a strategic advantage that allows its sectors to sustain cities of up to a million citizens. Most Temperate sectors are able to steadily produce

Vita Drinks in high quantities, supplying domestic consumption as well as the Arctic and the Moon, which are subjected to the limited availability of their respective food sources,

By having the largest sectors in the base game, the Temperate enjoys a very high variety of natural resources mostly used as construction materials as well as raw materials required in the production of high-level goods such as

Replicators. Many of these raw materials are also necessary for the production of products in other regions, such as

Diamonds, which is used in the Arctic to produce